By Race Directors HQ
Tutorials
Get more tips from our podcast: Listen to our Facebook Ads pod with EventGrow CEO, Andy Reilly.

Is everyone telling you you need to promote your race on Facebook and don't know how? Confused about where to begin?

We put together this fully illustrated step-by-step guide to creating your first Facebook ad because we believe Facebook is your best chance at reaching a new audience at the lowest possible cost. And if you've got the time to put the work in, we've got the time to show you how to do it.

Just make sure you've packed some sandwiches, cause this is a long one :)

To start creating your ad, click on "Create Adverts" from the dropdown menu located at the top right of your Facebook screen ("Manage Adverts" will get you pretty much to the same place).

The first thing you need to do in creating an ad campaign, is to specify your campaign objective. 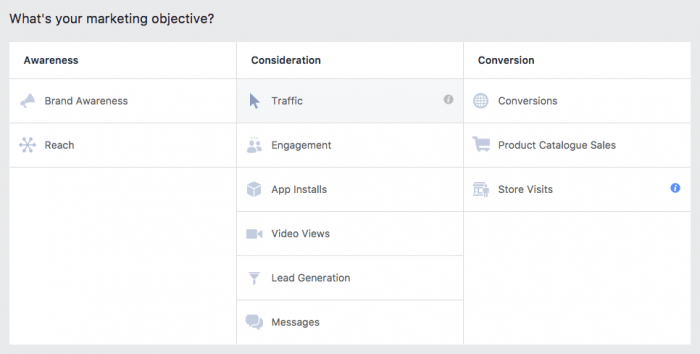 Is the objective of your campaign to increase awareness of your product? Boost engagement with your audience? Drive traffic to your website? Or invite people to take a specific action on your website, like joining a mailing list or making a purchase?

For a campaign whose main objective is to get people to your website so they can take an interest and register for your race, the two objectives that you will likely consider are Traffic and Conversions.

At the end of this feature, we will discuss a bit further why as your experience with ad campaigns grows you will want to choose the Conversions objective. For now, seeing as this is your first campaign, we will stick with the simpler Traffic objective. 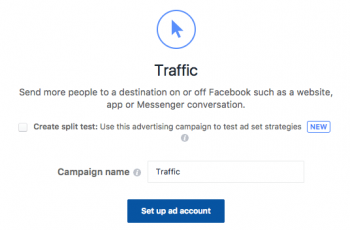 On the next screen you'll be asked to pick a country, currency and timezone for your ad account. Pretty self-explanatory stuff. 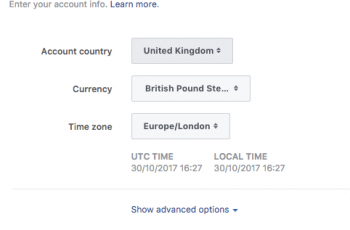 You will only be taken through this step once - the first time you launch ad manager - and you can later edit any choices you make through your account's Settings dashboard.

Next comes the very important business of picking an audience to serve your ads to. The general rule here is to pick an audience that is specific enough to make the campaign as relevant to your audience as possible, without being too narrow.

The problem with making your audience too narrow is twofold: 1) the pool of people you're reaching may be too small and your ads may quickly saturate that audience 2) the more people you exclude the more difficult you make it for Facebook to work out the best people within your audience to target (i.e. you are inhibiting Facebook's own optimization algorithm).

Here's an example where we target people living in Nottingham (within a 40km radius) who are also interested in Trail Running. That gives us an audience of 24,000 people which is neither too Specific nor too Broad, according to Facebook's own swingometer. 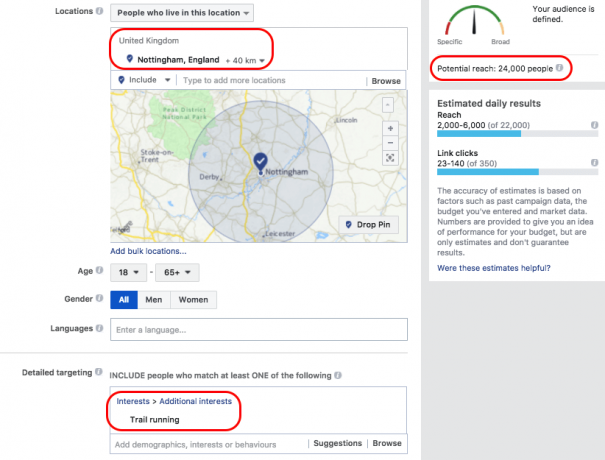 Also note that we now have an idea of how may of the 24,000 people in our audience we would expect our ad to reach daily: between 2,000-6,000 with expected clicks in the 23-140 range. These are, of course, estimates and the numbers themselves will vary depending on our budget (see below).

Placements is all the areas and platforms and devices that your ad can be shown on. 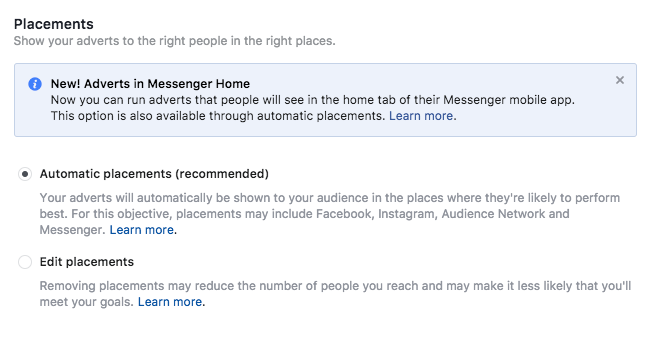 You almost always want this to be set to Automatic Placements. You should not be making any assumptions about the placements your audience will respond best to. Even when data starts coming in from your live ad, you should think twice before switching to custom placements.

How much are you willing to spend on your campaign and over what period?

There are no rules for this, but we tend to favor evergreen campaigns (i.e. campaigns that run continuously until canceled) with a set daily budget.

In order to avoid reach ups and downs that come with picking specific days in the week, you should run your campaign for a minimum of 7 days. And you should here too avoid tinkering with the delivery schedule ("Delivery type" at the bottom). 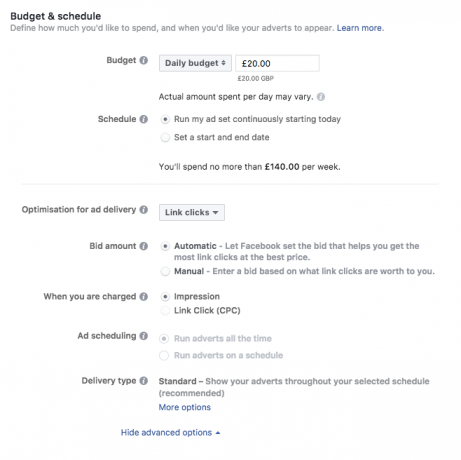 One interesting thing we have discovered is that Traffic campaigns almost always work better when you select to be charged on Impressions rather than Link Clicks ("When you are charged"). So leave that radio button pointed to the default of being charged for Impressions, even though what you're ultimately interested in is clicks.

Lastly, also leave the Bid on Automatic. That's another thing you may want to revisit once you grow more confident with Facebook campaigns, but for now Automatic bidding will do - meaning, we will let Facebook serve the ads and charge us the lowest possible amount in line with our campaign objective. We will then monitor the resulting cost and how it evolves once our campaign goes live.

Finally we're getting into the creative part! And first thing we need to do is choose a format for our ad.

Of the formats available, we'll discuss the first three which are generally the best-performing formats for Traffic and Conversions campaigns.

The single image format is the simplest format available: one image, one caption, done. Being simple, however, doesn't mean it's not effective. There's a reason why, with the exception of video, most professional advertisers continue to work mostly with single images.

Here's what a single image ad would look like on the desktop feed for a made-up Madeira Ultra trail race.

The carousel format is a more complicated format that can be very effective when used to tell a story through a series of images. In the context of a race ad campaign like ours, the story we choose to tell may be that of overcoming a huge physical challenge to make it to the finish.

Here's what a carousel would look like, using race images from start to finish.

Note that the carousel format allows a different text description and landing page for each image in your ad. Our advice is to keep the text to a minimum and use a single landing page: the one you would use for a single image campaign.

Video is fast becoming the medium of choice for advertisers, because of the higher engagement it enjoys and the many ways Facebook promotes its use (e.g. autoplay on news feeds).

If you do decide to produce a teaser or highlights video for your race, it is absolutely imperative you use it in a Facebook campaign. Even a half-decent video will work wonders, be shared loads and give your race the best chance of spreading amongst potential participants.

By the way, it is not even necessary to create a fully stylized expensive video for this. Here's some ideas on how to repackage live video or even your GoPro clips from around the course to create a useable video teaser.

Where do you want people to go when they click on your ad? This is you ad's landing page. It should be either your race website homepage or a purpose-build landing page for accepting Facebook ad traffic.

If you don't have an image you can pick one from Facebook's stock image library, but we definitely wouldn't recommend it. If you're taking paid promotion seriously - and chances are, if you're made it this far, that you do - you should start with investing in some quality original media for your race.

Whether you pick one image or more, make each image a "wow!" image. Pick the greatest-looking, most captivating images you can find. How well your campaign performs will bear heavily on your choice and quality of media. You've been advised! :)

Pick a Call to Action

This is the famous CTA that will be placed in a button in your ad (bottom right in the case of desktop feed ads).

It is tempting to choose Sign Up for your CTA when all you want from your campaign to get more people to register for your race. Usually, however, softer CTAs work better and the standard "Learn More" CTA works best of all. 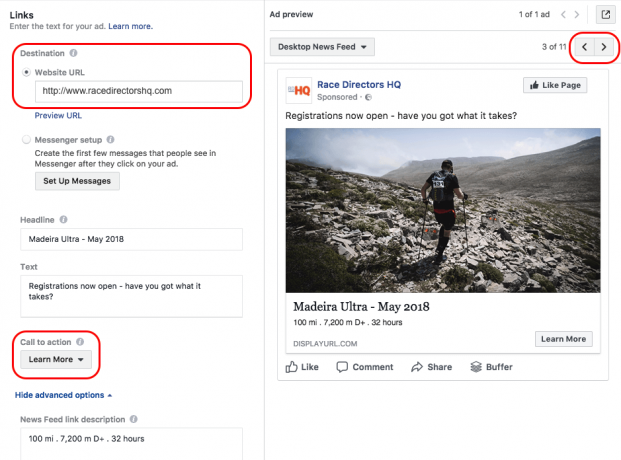 Next to your image, the words that people see can make a big difference to your ad's performance.

There's three bits of wording you will need to think about:

Check how your ad looks

When you have both your image and ad copy done, flick through the different ad placements using the arrows on the top right corner above the ad preview window. Check what your ad looks like across different devices and different display areas. Are you happy with the result?

That's it - you're all done! Click on the "Confirm" button at the bottom and your ad will be sent to Facebook for review. Once everything has been checked, your ad will launch at the time you have set and continue to run until canceled or until it reaches its schedule end.

After you've created your first ad, you may want to experiment with different ad formats, images ad copies to see what works best with your audience. This is split testing (also known as A/B testing): trying out different versions of ads in an aim to improve ad performance.

This is another topic we won't go into in any great detail here. If you do decide to split test, keep just one rule in mind: vary one or few aspects of your ad at any one time, so you can be sure you can draw meaningful conclusions from the results. Creating two ads that differ a hundred different ways won't tell you what bits to keep and what bits to continue optimizing.

Now that we've been through the creation of a Traffic ad, let's go back to the point about choosing between the Traffic and Conversions campaign objectives.

Back in Step 2 we decided for simplicity to create a Traffic campaign and said that with time you may want to move over to Conversions campaigns. The reason for this is that Conversions campaigns, if implemented well, can be a lot more effective in getting visitors to take specific actions (=conversions) on your website.

The way conversions work is through the use of a Facebook pixel, a bit of code you add to your website. By adding different flavors of so-called pixel events on different pages of your website (e.g. by adding a "registration successful" event on your registration-complete page) you can instruct Facebook to work on achieving as many of those specific events as possible by optimizing the traffic it sends through your ad.

In the end, by being able to optimize for specific events that are of interest to you - and even attaching specific revenue value to those events, e.g. the value of your registration fee when someone registers - you can make your campaigns a lot more efficient.

But, as we said, that is all a discussion for some other time...

Once your ad goes live, you'll need to keep an eye on how it performs and make any necessary changes to how the ad looks and how it delivers. You can do all this from the Advert Manager which you can access through the "Manage Adverts" option in your profile top right dropdown menu (same menu we clicked at the very start to "Create Adverts").

This is far too broad a topic to go into here. However, there are a few things you'd want to keep an eye on:

Well, that was long!

Sure was, but there is no other way to put all this information plainly enough to be helpful.

You've done great coming this far and we wish your Facebook campaigns the best of success. Now go create your ads and when you do come share them on our race director Facebook group.

How to Increase Registrations With a Facebook Remarketing Campaign

How to Market Your Race as a Prep Race on Facebook